I had a lot of fun at Saturday's workshop with Barbara Chainey and Chris Franses but then again that is the joy of their workshops in that learning is made to be a great deal of fun, oh and did I mention the chocolate biscuits! It was a different take on curves than the log cabin, this time creating pinwheel blocks in the morning and then free-cut nine patch blocks in the afternoon.  I got all my morning blocks done but had to finish my nine patch blocks as 'homework'. Can't believe how quickly 32 blocks came together. I decided to set my pinwheels on point and add a wonky square border as the start to a full size quilt. 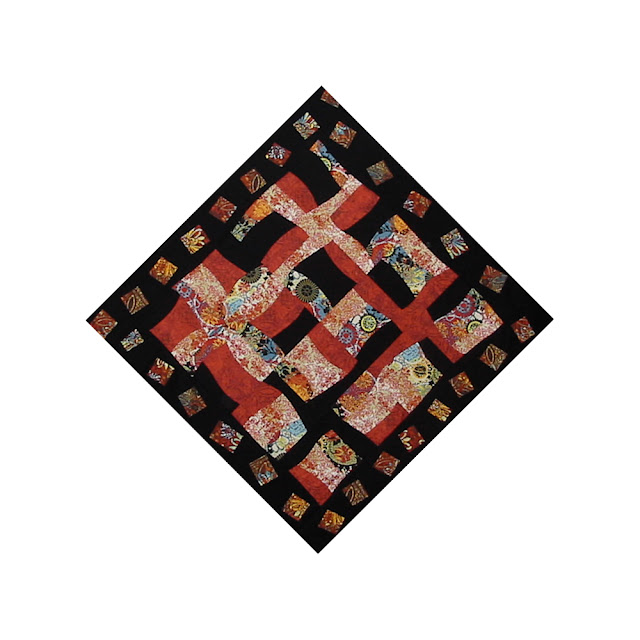 I'm sort of making decisions as I go along so watch this space...

The free-cut nine patches have ended up like this 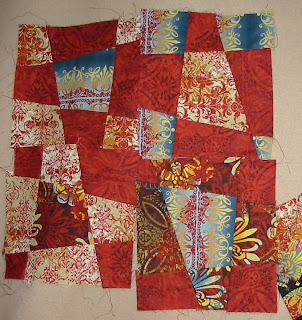 They are going to be re-cut and re-sewn (what is it about quilters wanting to cut up and re-sew fabric!) and will be used in the quilt although just how I am not sure.

I have got myself organised into doing machining during the day and handwork at nights and, to assist with keeping things together and not placing pins where either the cat or I can sit on them, I made myself a sewing thing to go over the arm of the settee. The pattern is courtesy of Amy and can be found here. She has a lovely blog which is well worth a visit. I decided to be very lazy and just use the fabric as it was rather than piece it. 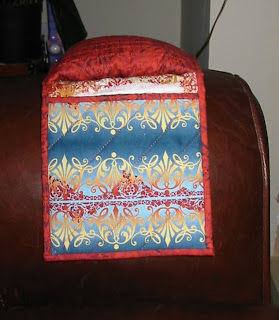 Very handy as it has pockets on either side as well as the pincushion on top.

My current hand sewing is embroidering the free designs from the Gum tree blog. I have done the first two but they are yet to be added to anything. Yet more UFOs 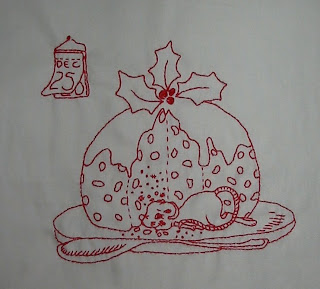 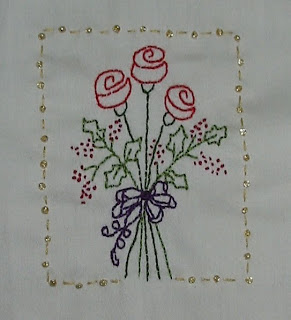 Very nice little projects for what are becoming quite cold nights. I think that winter may be ushering autumn out. Hopefully I will be able to get some embellished or woven backgrounds done for some hand stitching soon.

I have also been reorganising my workroom which was beginning to look as though a bomb had hit it. I decided to invest in some 'Really Useful Boxes' and now, hopefully I can be a little more tidy and spend less time hunting for things. Having said that I have been searching for a pile of colour catchers that I have hidden away somewhere but can't find which box they are in! This is the 'after' photo. I suppose that I should have taken a 'before' one but I forgot. 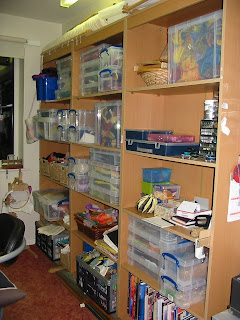 Nothing else for now so happy stitching.

If Ferrari can't do it, I can't think of a more deserving person than Ross Brawn

Talking Threads has just launched on the Country Channel and for those of us who do not have Sky it is also available to watch online. The first programme was silk painting by Jill Kennedy and it is well worth watching. Just follow the link if you want to watch it online.

I have received some lovely things in the mail over the last couple of days, the first of which was some fabric and thread from Dawn Hay in Australia. Dawn is one of the Gum Tree designers and sent a thank-you to a number of people who commented on her giveaway winner. Thank you Dawn, now I will be able to start my Gum Tree Christmas designs. Just look at that beautiful card as well. 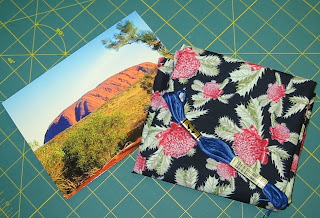 My other surprise mailing has also come from Australia and it is my Friendship Bag swap. This was from Rebecca and included some fabric, an Australian magazine and some hand made soap . The soap contains olive, coconut and macademia oils and lavender and palmaress essential oil. It smells absolutely beautiful. Thank you Bec. 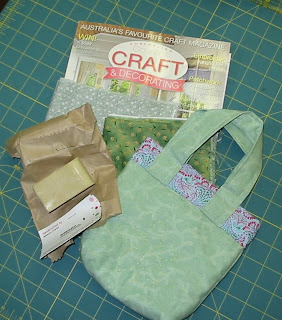 A few posts ago I mentioned that I had bought a peg loom from The Threshing Barn. Yesterday I decided to try it out. Not being sure how to start and finish it I did a small piece and then threw it under the embellisher. It has turned out quite well and with some added stitching could be heading for a small notebook wrap. 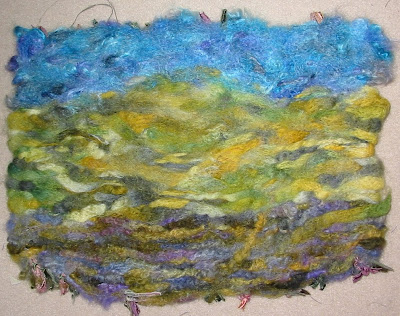 The result of this was a desire to learn more about the loom and so I duly headed off to the Threshing Barn to book in for a workshop in early November. I defy anyone to go in there and come out empty handed! 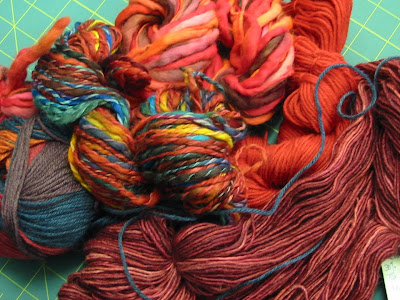 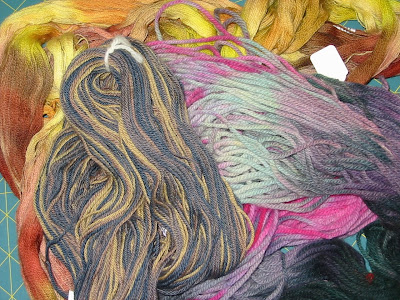 I even found these lovely buttons. The ones on the left are from the 1930s and were languishing in a box in a factory when they were found and offered to those of us who cannot resist such things. 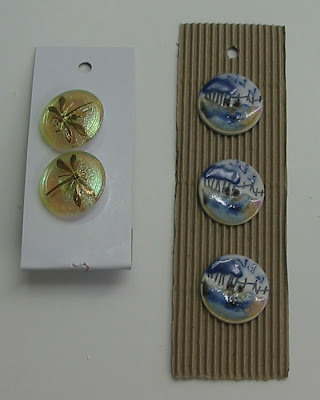 The dragonfly button has come in really handy for a mug carrier that I have made using a pattern by Paula Storm. I don't really need to take a mug to the workshops that I attend so it will come in handy for keeping things tidy in my workspace. 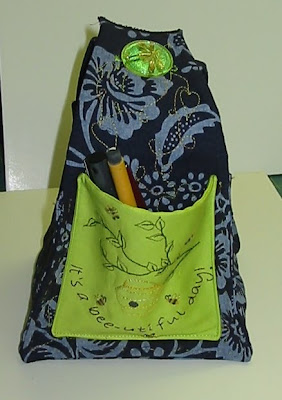 A little worrying on the Royal Mail front is that the postcard for the latest Popular Patchwork swap and my first OU assignment, that were both posted on Saturday, do not yet appear to have arrived. The postcard theme was Harvest Festival and as I don't think that Alyson is a blogger I will add it to this post. It is foiled felt with a paper napkin embellished onto it then embroidered by machine hand and with some beads added. 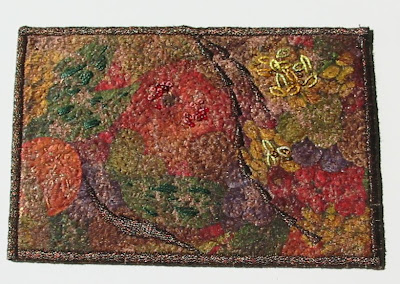 The good news is that my teacup block for the Popular Patchwork 2012 quilt did arrive promptly. The background fabric is some Liberty lawn fabric that I had left over after making a blouse almost 30 years ago. The blouse eventually fell apart after excessive use. 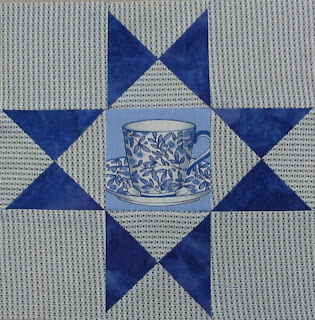 Finally, I really must get around to making something to hang in my workroom window. Every time the window cleaner has been, one of the collared doves decides to do a kamikaze lunge at the window, leaving me with its outline for the next month. It doesn't seem to injure itself but is obviously not learning its lesson. Not the brightest dove in the flock! 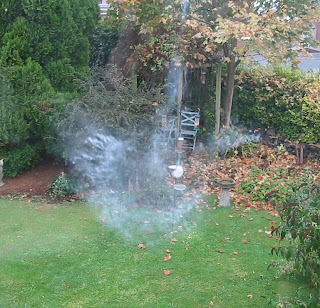 Until next time, happy sewing

In between the studies

Today I received the Summertime quilt from my swap partner Meg Haskins in North Carolina. This is Meg's first time in a swap and she chose to do a piece from 'The Little Prince' by Antoine de Saint-Exupery, which is, I think my most favourite book of all time. Thank you so much Meg, I love it. 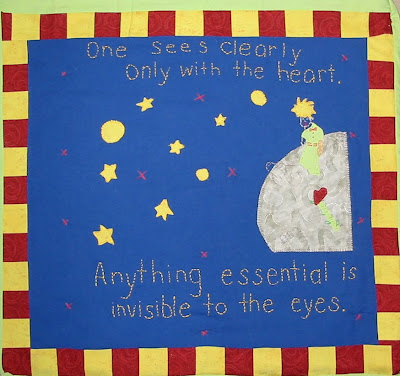 It also came in a beautiful hand-painted hessian bag. The cardinal is the state bird of North Carolina and the Pine is the state tree. I was actually very relieved when the postman knocked on the door this morning, (even though he caught me in disarray, having just stepped out of the shower) as we are having postal problems in the UK at the moment. 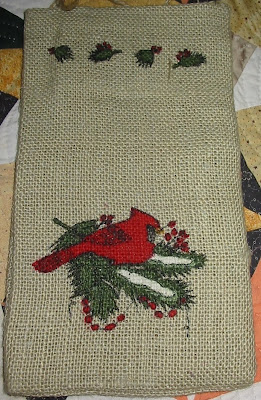 I managed to get two more blocks done for the curved log cabin hanging that I mentioned in the last post. This is now another UFO that needs quilting.

If you scrolled down far enough you may have noticed that I have a button for Paula Storm's BOM 'It's a Hoot'. I have just finished the second one of these and decided that I would make small hangings from them. They are simply fused onto Pelmet vilene and edged with satin stitch. A lovely addition to my kitchen. These are lovely little designs that are really handy to sit and do in the evening, or even at work during my break. Paula is one of the 'Among the Gum Trees' designers and if you have not yet checked out their site yet, do pay them a visit, either through the link here or the button on my side bar. 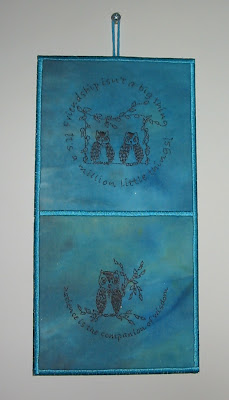 Finally the second pincushion which will be going to my cousin on Sunday for her birthday. Both sides. 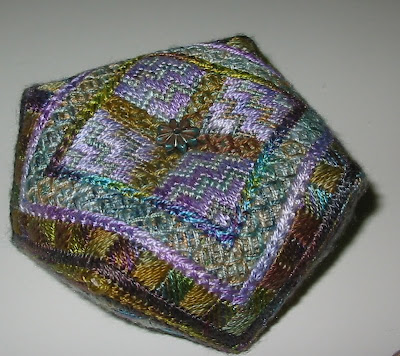 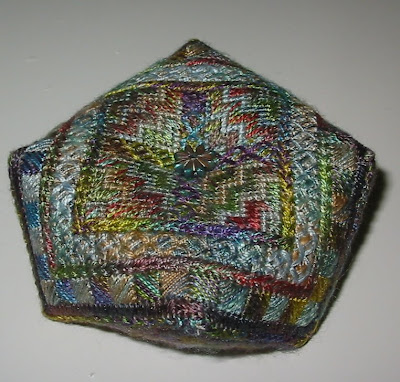 The Greek continues apace and my first assignment is due in on the 15th so that is all for now.

Enjoy your sewing wherever you are. 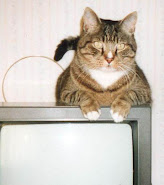